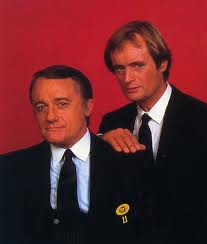 For years there were attempts to reprise The Man From U.N.C.L.E.

During 1976-77, producers Ivan Goff and Ben Roberts hired Sam Rolfe to write a pilot for a new U.N.C.L.E. Rolfe’s effort, “The Malthusian Affair” featured an older, but still active, NS and IK who worked with some younger agents. But the project never went before the cameras. In the early 1980s, there was an attempt at a theatrical movie. The premise was Thrush had taken over the world but nobody knew it. Besides Robert Vaughn and David McCallum, actors like Klaus Kinski and Jane Seymour were contacted. But again, no luck.

Finally, in 1982, a made for TV movie, “The Return of the Man From U.N.C.L.E.” was filmed, airing in April 1983 on CBS. Vaughn and McCallum reprised their roles. The original airing finished 22nd for the week in the ratings, apparently not good enough for CBS to consider a new series. In the early ’90s, Sam Rolfe made another attempt on a cable version (featuring new agents) but this too fell by the wayside. To date, the 1983 TV movie was our only look at a new U.N.C.L.E. Principal photography for a new take on U.N.C.L.E., with Henry Cavill and Armie Hammer as Solo and Kuryakin, took place in fall 2013 and that movie is scheduled for release in August 2015.,

A more detailed review follows. But the upshot is the TV movie had its moments but was not all it could have been. All contents   ©   1997-2014  William J. Koenig

The Return of The Man From U.N.C.L.E., subtitled “The 15 Years Later Affair.”

(Both of these last two credits appear in the main titles but are not together. Felton’s credit appears first, then several other credits appear before the Rolfe credit is shown.)

Synopsis: In Alaska, agents of a reborn Thrush steal nuclear devices from a U.S. plane. Janus (Geoffrey Lewis), a traitorous UNCLE agent hired by the new Thrush, declares the criminal organization “has come of age” because it is now “a nuclear power.” Shortly thereafter, the former Thrush leader Justin Sepheran (Anthony Zerbe) is sprung from a minimum-security prison (he had been considered a model prisoner). Thrush has set up a new HQ in Libya and is demanding $350 million in ransom. Just for fun, Thrush demands former UNCLE agent NS deliver the ransom. Current ace UNCLE enforcement agent Benjamin Kowalski (Tom Mason) is not amused. “Who is this guy?!” Kowalski utters upon hearing that Thrush wants Solo to deliver the ransom.

NS, now a well-to-businessman, is gambling in Las Vegas with some Russian officials overseeing a ballet company on tour. Luckily, he still carries his pen communicator when the summons comes from Sir John Raleigh (Patrick Macnee), the new head of UNCLE. It is implied that Alexander Waverly has only recently died and Raleigh clearly is shown to have just arrived at the NYC HQs. NS, who is losing a high stakes poker game, agrees to help — especially after UNCLE offers to bail him out financially. But NS also has to cope with a Russian ballerina, Andrea Markovich (Gayle Hunicutt) who wants to defect. A wild chase ensues, with NS chased by the KGB. Visiting British agent “JB” (one-time 007 George Lazenby) helps out with his especially equipped Aston Marton DB V.

In New York, the situation is explained to NS. He says he needs IK’s help. But IK, now a dress designer, quit UNCLE also — he was the agent betrayed by Janus. Eventually, the duo is briefly reunited before working opposite ends of the case. IK trails Thrush officials to Chicago while NS guards an innocent actor, Nigel Pennington-Smythe (Simon Williams) whose uncle designed the weapon. Pennington-Smythe, conveniently, has a photographic memory and that could assist Thrush. Pennington-Smythe, of course, is kidnapped by Thrush in New York.

Solo has a rough time. Kowalski pokes fun at him and Andrea is working for Thrush — although she’s been blackmailed into doing so. Solo figures out only Andrea could have tipped off Thrush to Solo’s plans for protecting Pennington-Smythe. NS confronts Andrea but is knocked out by Guido, Sepheran’s favorite thug. Solo meets Sepheran in Libya to discuss details of the ransom drop. But Solo concludes Sepheran will detonate the bomb anyway. Kuryakin isn’t doing so well either. He’s captured and is in a cavern near a nuclear power plant, where the bomb is ticking away.

Eventually, NS leads an UNCLE task force against the new Thrush HQs in Libya while IK defeats Janus. The traitor actually was going to double cross Thrush (well, whaddya expect from a guy named Janus?), deactivate the bomb and sell it to the highest bidder. Kuryakin and Janus fight and IK dispatches the villain. Now it’s up to Pennington-Smythe to deactivate the bomb. He does so but not before the now-familiar scene where it’s down to cutting one of two wires and the hero has to guess. Meanwhile, the UNCLE raiding party has defeated the Thrushmen and Solo rescues Andrea. Sepheran tries to detonate the bomb but is too late — Pennington-Smythe guessed correctly and the bomb is deactivated. Solo confronts Sepheran but the Thrush leader shoots Solo and escapes. However, Solo evidently was hit in the “fleshy part of the shoulder” to use Kitt Kittridge’s words (see MFU Eps. 21) and Solo isn’t hurt too badly. Also conveniently, the cavern has a closed-circuit TV connection to Thrush HQs in Libya. This enables Solo and Kuryakin to compare notes (which is nice since, by this time, they haven’t talked to one another for nearly an hour of screen time). “I think was a lot easier 15 years ago,” Solo says. “It was,” agrees Kuryakin, as ever a man of few words.

Despite the pain (and Solo isn’t even wearing a sling — it must have been a superficial wound), our duo meet at a bar and ponder whether they were better off working for UNCLE. Afterall, Kuryakin muses, things are much clearer when somebody is shooting at you. Just then, there’s a news bulletin about how the U.S. secretary of state is missing. Suddenly, Solo and Kuryakin get another call from Sir John……

High points: Robert Vaughn and David McCallum are quite good, better than the script they’re working from. Patrick Macnee also is fine as the new UNCLE chief. The scene where Solo’s pen goes off is very nice, especially the look on Vaughn’s face. Although director Ray Austin never worked on the original series, he was a stunt arranger on “The Avengers” and a director on “The New Avengers.” He can stage action scenes effectively. Composer Gerald Fried and director of photography Fred Koenekamp were the only major contributors from the original series to also work on this TV movie and both do a professional job. Koenekamp creates a new “whip pan” by panning slot machines in a Las Vegas casino. Even adjusted for inflation, the TV movie’s $2 million budget was the most money spent on a single UNCLE story and there’s far more location shooting than there ever was in the series.

Weak points: Writer/executive producer Michael Sloan apparently did little research on the original series. Reportedly, he refused to watch any Season One shows because they were in black and white. He writes this as a 007 ripoff, the main plot more than resembling the 1965 “Thunderball” James Bond movie. Thrush, in the original series, went after mind-reading devices, vaporizers and other exotic hardware. The idea of Thrush being a “nuclear power” sounds silly to anyone familar with the series. UNCLE had several things that made it different from Bond (the idea of a multi-national organization, a heavier reliance on science fiction than 007, etc.) Another problem with this TV movie is the structure: NS and IK are hardly together at all.

Trivia and gaffes: When NS goes into Del Floria’s, the changing room is on the opposite side of the shop compared to the series (UNCLE has moved and Del Floria’s now is an ordinary tailor shop). When NS and IK are walking on the streets of NYC, it’s obvious the filming really took place in Los Angeles (palm trees in the background). When “JB” helps out NS in Las Vegas, he somehow goes from being behind everybody’s car to right in the middle. UNCLE agents interrogating Sepheran in prison are wearing UNCLE badges! Also, it’s unclear whether the badges perform the same function (in the series, you needed them to get through HQs) because the new offices don’t have sliding doors and such.

In the Las Vegas sequences, it’s established that Russian Andrea is a movie trivia buff. As she and Solo flee the KGB agents, Andrea says the chase reminds her of “Bullitt.” A grim Solo replies, “I’m familiar with it.” A nice in-joke since Robert Vaughn played an overly ambitious politician in the film. And, of course, once Andrea spots “JB,” she says how the situation seems like “On Her Majesty’s Secret Service,” Lazenby’s one 007 film.

Keenan Wynn has a cameo as a secondary Thrush official. He detains Solo momentarily in the final sequence then asks the UNCLE agent, “How do you stay so young?” Solo’s replies, “Good makeup man,” before clobbering him.

Finally, Alexander Waverly has only died recently, we’re told here. If that’s the case, UNCLE must not believe in a retirement age for Section One brass (Leo G. Carroll was in his 70s during filming of the original series). The UNCLE logo was revamped. This version has a silouhette of a man standing inside a globe, instead of standing next to one like the original series. The revamped Thrush uses a lighting bolt (boring!) as its new symbol. However, Robert Short (listed as technical adviser, and who worked on the aborted early ’80s UNCLE movie project) sneaks in an old Thrush emblem on Sepheran’s desk. Grade: B-Minus.