Before that trailer was released, there a lot of twists and turns.

This timeline refers only to the movie that actually got made. There were more than a dozen scripts commissioned after producer John Davis first optioned U.N.C.L.E. in the 1990s. Two  prominent attempts, involving directors Matthew Vaughn and Steven Soderbergh, are included in the NEVER MADE U.N.C.L.E.s PAGE.

Davis, meanwhile, will be credited as one of four producers (CLICK HERE to see the IMDB.COM entry) of the 2015 movie. But first, here’s how we got to this point. Text (c) 2015, William J. Koenig

2012: Not many details are publicly available. When Soderbergh, was running things, there were many public leaks about story (it’d be a 1960s period piece) and possible casting. Ritchie and Wigram, by contrast, keep a tight lid on things. Presumably much of the script developed occurred in 2012.

UPDATE (June 24, 2015): Collider.com on June 21, 2015 PUBLISHES AN INTERVIEW with co-writer and co-producer Lionel Wigram that fills in some of these gap. The interview was actually conducted in 2013, during filming of the movie but apparently embargoed.

JANUARY-MARCH 2012: Wigram and Ritchie work on the film’s basic story.

OCTOBER-NOVEMBER 2012: Wigram told Collider, “We had a draft that we started showing,” to studio executives.

EARLY 2013: “(W)e worked on the script, we polished it up, we got various actors, then we got greenlit (by Warner Bros.) somewhere towards spring,” Wigram told Collider.

March 18, 2013: The DEADLINE: HOLLYWOOD WEBSITE, in a story it labels as exclusive, reports, that Tom Cruise is in “early talks” to play Napoleon Solo in the Ritchie-Wigram project. Ritchie will direct, according to the story by Mike Fleming Jr. THE HOLLYWOOD REPORTER also does a story but sounds a more skeptical note, asking, “will this casting take?”

April 24, 2013: DEADLINE:HOLLYWOOD in another story by Fleming, reports that Armie Hammer “is set to star” with Cruise in the proposed U.N.C.L.E. movie. Hammer is to play Illya Kuryakin.

May 24, 2013: In a story labeled “SHOCKER,” DEADLINE: HOLLYWOOD’S FLEMING writes that Tom Cruise won’t play Solo and is out of the U.N.C.L.E. movie to concentrate on producing and starring in Mission: Impossible 5 for Paramount. Fleming says Warner Bros. “will now go hard” to cast a replacement for filming can begin in the fall.

May 28, 2013: According to multiple entertainment news websites, British actor Henry Cavill is now in talks to replace Cruise as Napoleon Solo. Cavill played Superman in Warner Bros.’s Man of Steel, which is set to premier in mid-June. Cavill had been a finalist to play James Bond in 2006’s Casino Royale but lost out to Daniel Craig.

June 4, 2013: Cavill, making the publicity rounds for Warner Bros.’s Man of Steel movie, tells USA TODAY he is committed to replace Cruise as Napoleon Solo. He doesn’t say much, except to say he’ll star alongside Hammer. On the same day, Hammer confirms his participation in the U.N.C.L.E. movie in an interview on AUSTRALIAN TELEVISION while promoting The Lone Ranger, due out in July 2013.

June 6, 2013: In ANOTHER INTERVIEW, Cavill hints the U.N.C.L.E. movie will be a 1960s period piece, saying, it will be “about the Cold War. American and Russian super spies join teams to fight international terrorism.”

July 31, 2013: Jon Burlingame, WRITING IN VARIETY, provides a detailed look at how the movie is shaping up. Among the details, Warner Bros. cut the budget to $75 million after Tom Cruise’s exit. Burlingame also reports “one of the filmmakers describes as a fairly serious action pic set in the ’60s.” The movie also will have an “origin story,” showing how Solo and Kuryakin were first paired. Filming is to begin in September. Burlingame also provides a history of other attempts to do a new version of U.N.C.L.E.

In a SEPARATE STORY THE SAME DAY, Variety says Elizabeth Debicki is “attached” to the project.

Sept. 3, 2013: Warner Bros. officially announces the movie in a PRESS RELEASE. Production is to begin Sept. 9. Casting of note: Hugh Grant is play Waverly, the role that Leo G. Carroll had in the original 1964-68 series.

Sept. 6, 2013: Production actually starts three days early in the U.K., in a scene that’s supposed to take place in Berlin. With the first day’s shooting, Henry Cavill becomes the first actor to play both spies associated with Ian Fleming: Solo and James Bond (in his Casino Royale screen test).

Sept. 12, 2013:  DEADLINE HOLLYWOOD reports that Luca Calvani will play the movie’s villain. The character’s name is Alexander. In the original series, Rip Torn played a villain named Alexander but based on the description, the Calvani character is different. 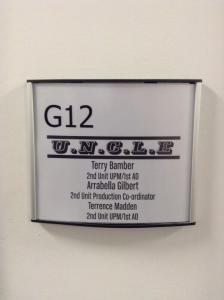 Sept. 13, 2013: Terry Bamber, assistant director and production manager of the movie’s second unit, posts a picture on Twitter of an office sign for himself and two colleagues.

I loved the original – now gang be prepared to be amazed at this – it will knock your socks off pic.twitter.com/pS7Ed6kIqo

(Update: Tweet can no longer be embedded, but you can view it by CLICKING HERE. The main point in including here was to show how “U.N.C.L.E.” was in the original typeface of the show.)

Sept. 16, 2013: A website called CASTINGCALLPRO says actor Jonathan Nadav has been cast in the movie as “Young Napoleon Solo.”

Sept. 21, 2013: The British newspaper The Daily Mail PUBLISHES A FEATURE about the movie, including a photo of actor Armie Hammer with director Guy Ritchie. In the photo Hammer is sporting a turtleneck, similar to the ones David McCallum wore as Illya in the original show.

Week of Sept. 23, 2013:  Production on the film shifts to Italy. The movie’s second unit also gears up work.

Oct. 4, 2013: Robert Vaughn is quoted by the British newspaper BIRMINGHAM MAIL that he’s gotten “feelers” about an U.N.C.L.E. movie cameo.

October  2013: A video surfaces of production in Rome.

Nov. 9,  2013: Henry Cavill News posts a video taken of a boat chase scene. The video is taken from a distance.

Nov. 23, 2013: The Henry Cavill News website PUBLISHES A POST with images of an Entertainment Weekly article that includes a description of an U.N.C.L.E. movie scene being filmed.

April 24, 2014: Henry Cavill, while in the Detroit area filming Batman v. Superman: The Dawn of Justice, goes to Ozone Music & Sound to do some post-production sound work on the U.N.C.L.E. movie.

Aug. 3, 2014.  The Henry Cavill News website HAS A POST that both Henry Cavill and Armie Hammer returned to the U.K. for some reshoots for the U.N.C.L.E. movie

Sept. 26, 2014: Composer Pemberton tweets a picture of sheet music of one track of the score titled “His Name is Napoleon Solo.”

Yessssssss!!! WE ARE DONE!! And I get the very last note of recording… #UNCLE https://t.co/2JaKPiAhML

Oct. 28, 2014: Sound mixing for the U.N.C.L.E. movie is completed. Composer Daniel Pemberton sends out a tweet:

Too tired to even open this… But cannot wait for Aug 2015 so you can all finally hear THE MAN FROM UNCLE.. pic.twitter.com/OkNHwHfZzW

March 2015: A story on SHORTLIST.COM about Henry Cavill reveals the movie’s script makes a change in Napoleon Solo’s background: that he was an art thief before he was recruited by the CIA.

May 9, 2015: Warner Bros. conducts a press junket in Rome for the movie. Principal cast members, director/co-writer Guy Ritchie and co-writer Lionel Wigram among those participating.

May 29-31, 2015: Second trailer for the movie shows up in some U.S. theaters along with the Warner Bros. movie San Andreas.

June 5, 2015: Composer Daniel Pemberton takes to Twitter to say work for the soundtrack album of the film’s score is complete.

June 10, 2015: Director Guy Ritchie IN AN INSTAGRAM POST unveils the final poster design and says a new trailer will be out the following day.

June 11, 2015: Guy Ritchie puts out AN INSTAGRAM POST two hours before the new trailer goes online. It contains a short preview of the trailer.

At 1 p.m. New York time, the trailer goes online. Also, composer Daniel Pemberton SAYS ON TWITTER that this trailer contains some of his score for the movie.

July 3, 2015: The Russian version of the trailer emerges and it has scenes not in the U.S. trailers.

July 15, 2015: Henry Cavill and Armie Hammer (in a pre-recorded spot) appear on ABC’s telecast of the ESPY awards. They introduce a long television spot for The Man From U.N.C.L.E. film.

July 25, 2015: The two-minute spot that aired during the ESPYs shows up on YouTube.

Aug. 10, 2015: Henry Cavill and Armie Hammer make a live appearance on ABC’s Good Morning America to promote the movie. That evening, New York City is the site of the movie’s premiere.

Aug. 13, 2015: In the United States, showings of the movie begin at IMAX theaters and other theaters with extra-large screens.

Aug. 14, 2015: The New York Times posts a video with director Guy Ritchie describing the ideas behind a key scene in the movie.

October 2015: Ahead of the movie’s release in Japan, there s a promo for both a new home video release of the original 1964-68 series and the the film, which is titled Code Name: U.N.C.L.E. A two-minute promotional video is produced: